Tom Seay traveled America, taking people on overnight horseback vacations for nineteen years as a professional horseback outfitter. His largest accomplishment as an outfitter was organizing and leading “The American Transcontinental Trail Ride” in 1995. Pursuing a longtime dream, and after a year of logistical planning, Tom successfully led a group of horseback riders and wagons from Savannah, Georgia, on the Atlantic Ocean, to San Diego, California on the Pacific Ocean, every step of the way on horseback, over 3,000 miles. The trip took four and a half months. Tom was hosted by 83 towns with 256 riders participating on parts of the trip, including Mayors, Chiefs of Police and the Texas Rangers. Former President Jimmy Carter taught the group Sunday School, as the trail ride passed through Plains, Georgia.

More recently he organized and led the highly successful trail ride from Mexico to Canada, which lasted over four and a half months. Other rides have included history themes including Old Tombstone, Jesse James Festival, President Reagan's Ranch, Lincoln's Ride to the White House, Medicine Lodge Peace Treaty Pageant, Knights of the Golden Horseshoe, and the retracing the history of Jack Jouett Trail Ride. He and Pat are constantly welcoming people to the farm for cattle drives and dinners in their colonial home.

Tom is a graduate of the University of Richmond. Besides producing the Best of America by Horseback television series, Tom is a full time farmer in Virginia. His genuine "down home" farm boy personality and great sense of humor makes you feel like you’ve known him for years.

Our Cast and Crew

Pat helped manage two horseback vacation businesses with husband, Tom. She traveled the country with him, taking guests on overnight horseback vacations for nineteen years. She helped him organize and coordinate “The American Transcontinental Trail Ride” in 1995, the ride that inspired their current television series, Best of America by Horseback.  Pat is a graduate of Old Dominion University. She developed many of her skills working on several major motion pictures in production coordination and media exposure. She was the Production Manager for a cable television station in Virginia for 11 years, overseeing every aspect of daily television production. Pat’s passion is producing outdoor sports programs, such as fishing, hunting, skiing, boating, flying and horseback riding. She has produced segments for television all over the United States, Canada, and locations outside of the U.S. including England, Scotland, Mexico and the Caribbean. Pat’s attention to detail is evident in the production of the Best of America by Horseback series. She makes sure each episode is informative, educational, scenic, and is appealing to a broad audience. If viewers do not have horses, her goal is to still have them enjoy the beautiful scenery, wildlife and interesting information she tries to include in every show.

When calling Best of America by Horseback, you’ll most likely hear the kind and gentle voice of Lisa. Lisa has been with us for more than 15 years and has the responsibility of managing our reception, mailings, and registering riders for all of rides and events. In addition, she assists with the organization, production, and shipment for orders placed on our online store. Lisa is an integral part of the coordination and organization of the day to day tasks-- we don't know what we would do without her!  Lisa has a degree in Cosmetology and lives in Virginia with her family.
Karen Mattos
Special Events Coordinator

Karen first met Tom Seay and the BOABH family in 2006, and has since been on several rides and cruises. In 2017, she offered to help the team and was asked to help coordinate events like Daniel Boone Days and the Chisholm Trail Ride. Karen also served as Stage Manager for the Christmas Music Show.

Karen worked as Veterinarian Technician for 20 years in both large and small animal clinics. She lives in California with her husband, Jim. The two of them enjoy taking care of their orchard of apricot and avocado trees and making homemade apricot jam (a three generation recipe from Jim's family).  Karen enjoys riding her two quarter horses out on the trail and working cattle.

Del Shields, along with his wife Shevawn, are helping expand Best of America by Horseback episodes by hosting additional rides in the midwest and western states.   Del has been with the show since 2006 both hosting and entertaining guests with his authentic cowboy songs.  Talk to anyone who has ever heard Del sing or speak in rhyme the poetry he writes and they will tell you, “he’s been there.” Upon hearing him yourself, you realize the Cowboy breed is still alive and well. Del has been referred to by some as “the cowboy with the velvet voice.” This cowboy's singing and poetry career is full speed ahead. Del appears on many Best of America by Horseback episodes performing his original cowboy music and is now hosting and producing episodes on his own.  His motto is, “come as you are, prepare to go away a little bit western.” Audiences everywhere will attest to this matter, having left Del's performances, they feel as if they had heard the bawling of the cattle and seeing amber setting of the sun themselves. With years of rodeo bareback riding experience Del is able to sing the ballads of the rodeo life with true emotion. He has years of horse training experience under his hat, and is a farrier by trade. Ranching is branded into his heart and soul, and spills out through his music and poetry. Del performs in person on many of our ride events.

Hosted by outdoorsman Tom Seay, this series captures the beauty of America by horseback. It is the number one trail riding show in the country, featuring magnificent riding locations around the United States and the surrounding countries while also providing educational and informative segments on horses, travel, equine care, and quality equine products and services.

Each riding location featured on the show is a destination where viewers can go with their own horses; some destinations even provide equine for guests to use. Best of America by Horseback covers all of the details you would want to know before you visit yourself, such as the trails and terrain, the footing and the difficulty level of the trails, the available lodging accommodations or camping facilities as well as ease of access with large rigs.

Other segments on the show feature tips for traveling with your own horses, such as how to plan and map a trip, how to find stop over locations for horses, trailer safety tips, vet tips and horse nutrition tips. If you do not have a horse, you will still enjoy watching the show for the scenic riding locations, local history, and beautiful wildlife of each area.

We are passionate about this country and it's people and it shows through in-depth interviews by our hosts. Best of America by Horseback television show has been broadcast weekly on RFD-TV since 2005. 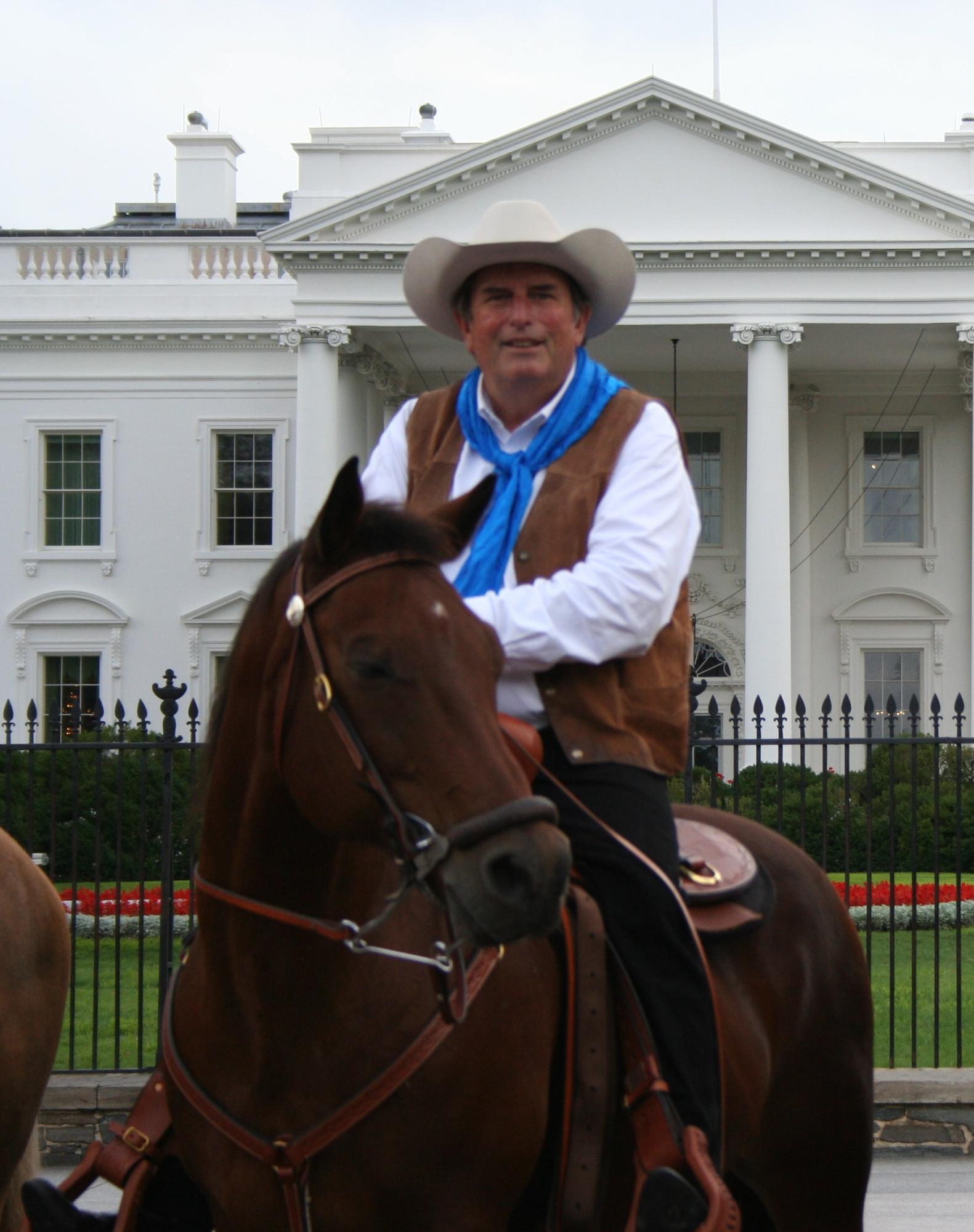 Wanda and her late husband, Mike, have become some of Tom and Pat's closest friends. Both of them have been a huge help both on location and en route. ​Wanda and her husband Mike were both integral parts of the Mexico to Canada ride in 2009. Wanda has traveled with Tom and Pat to the Yukon, Belize, the Caribbean and on all show productions across America. Wanda has had a passion for videography and had the opportunity to turn her hobby into a job with Best of America by Horseback. Wanda helps Pat film the rides and events at the different locations. She is always ready to go film. Wanda's sweet nature and southern accent makes her a great addition to the Best of America by Horseback Crew. She really enjoys fishing and of course trail riding.
Sam Wylie
Event Planning & Trail Boss, Kansas

A deputy sheriff with the Summer County Sheriff's Department, Sam is also a writer and devoted family man. He currently resides in Kansas.